I had an enquiry yesterday about Templar Vintners Ltd from AB.

The enquiry
I wonder if you have any information about Templar Vintners?


They contacted me in November about buying Bordeaux Wines. I have a portfolio of wine that is held under an umbrella by the Bordeaux Wine Company. I am at a stage where I wish to offload some of my wine and was looking for a competitive price. Templar contacted me around that time - not sure how, in retrospect. Web site up and running, other references online but no figures at Companies House - I haven’t visited their premises yet.

I have already bought a case of Ausone 2008 for £7,700 - and have a Certificate from them but realise this is no guarantee that the wine exists.

Their website (http://www.templarvintners.com/) claims that:
'Templar Vintners is one of the leading fine and rare wine merchants. We hold some of the greatest and rarest vintage wines; many of the wines we hold are increasingly unavailable elsewhere. We also frequently offer more recent vintages, at very competitive prices, which gives customers excellent opportunities for capital growth. Our clients benefit directly from our immense buying power, amassed through years of experience, and strong allegiances with a wide-variety of industry experts. Over 70 per cent of Templar Vintners’ customers are high net-worth individuals and seasoned investors. The remaining 30 per cent are a collection of British and international merchants , wine brokers and institutional investors.'

If this claim 'to be one the leading fine and rare wine merchants' is correct then this is a truly remarkable and probably unprecedented achievement. The company was incorporated on 8th August 2008 when it was called 888 Finance Ltd. On 30th June 2009 the registered office was changed from www.buy-this-company-name.com, Suite B, 29 Harley Street, London W1G 9QR to the current address at Hamilton House. On the same day Andrew Griffiths was appointed as director and James Allie as company secretary and on 3rd July 2009 the company name was changed from 888 Finance Ltd to Templar Vintners Ltd. The company's first accounts are due to be filed on 8th May 2010. Thus Templar Vintners Ltd did not start trading until early July last year.

Because of the nature of en primeur (see here) it is impossible at this stage to verify whether Templar Vintners has indeed placed on order for and paid for your case of 2008 Ausone. To be certain you would need to see their order and payment records and ideally details of the transactions all the way down the chain to the négociants in Bordeaux. I suspect that most companies would decline to release these records on the grounds of commercial confidentiality. You will not be sure whether the case of 2008 Ausone for which you have paid exists and is yours until it arrives in this country either at the end of this year or in the early part of 2011.

This is why it is always crucial to carry out as much due diligence on a company before buying en primeur from them and to buy only from established companies who have a solid track record.

It is interesting to download the selection of articles on wine investment from the Templar site and do a compare and contrast.

First up is an article from the Independent on Sunday (22nd June 2008) by Kate Hughes and Julian Knight. Here is the second paragraph (page 2) from the Templar's version:

For a private investor, there are three main avenues into the wine world. A specialist fund pools investors' money to buy wine to trade, but that doesn't mean you will get to drink your returns, just as investing a stake in a racehorse won't get you into the saddle. Wine Asset Managers (Templar Vintners), for example, offers the Fine Wine Fund, requiring a minimum 15 per cent of the fund's annual performance growth.

This is original version of the article as it appeared in The Independent on Sunday:

'For a private investor, there are three main avenues into the wine world. A specialist fund pools investors' money to buy wine to trade, but that doesn't mean you will get to drink your returns, just as investing a stake in a racehorse won't get you into the saddle. Wine Asset Managers (wamllp.com), for example, offers the Fine Wine Fund, requiring a minimum investment of £50,000. The annual management fee is 2 per cent, plus a further 15 per cent of the fund's annual performance growth.'

Templar Vintners Ltd are not authorised by the FSA. Any company in the UK running a wine fund as opposed to offering cases of wine for investment is very likely to be judged to be running a collective investment scheme as will need to be authorised by a financial services authority. In most cases in the UK this will be the FSA.

'The second article is the one we wrote in the FT (with my name next to it) for the wine investment supplement in June 2008, and the ad at the bottom was placed by Vinum Fine Wine Fund (we have a hard copy here in our office). They have clearly replaced Vinum’s name with their own.'

As William Beck points out, this is exactly what Templar Vintners Ltd appear to have done as shown here: 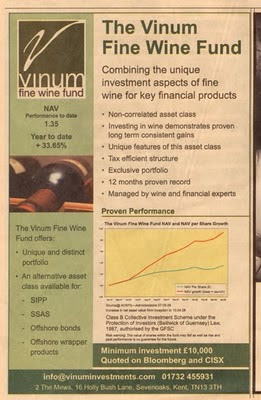 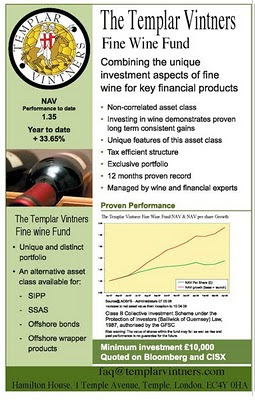 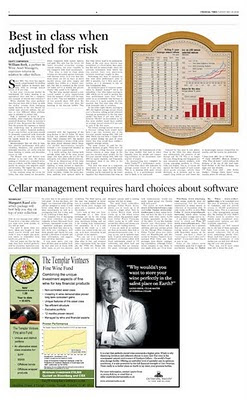 The full page from Templar Vintners showing the ad in the bottom, left hand corner
Templar Vintners Ltd appear to just have changed the name and the logo leaving in the details about the authorisation by the GFSC (Guernsey Financial Services Commission: 'Class B Collective Investment Scheme under the Protection of Investors (Baillwick of Guernsey) Law 1987, authorised by the GFSC'.

The Vinum Wine Fund is authorised by the GFSC as their records show: 'Vinum Wine Fund 1033646 Vinum Fine Wine Fund PCC Limited, The Class B'. There is no mention of Templar Vintners Ltd in the GFSC records. The claim by Templar Vintners of GFSC authoristion is thus entirely false – I imagine the Guernsey authorities will not be amused. I have forwarded details to the GFSC.

I have invited Andrew Griffiths, director of Templar Vintners Ltd, to respond to this post. 25.1.2010: Andrew Griffiths has responded – see his comments below.
Posted by Jim's Loire at 10:37