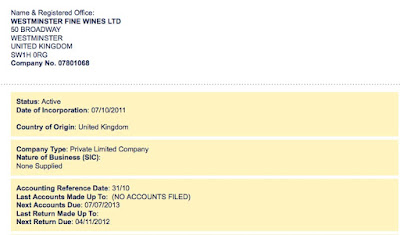 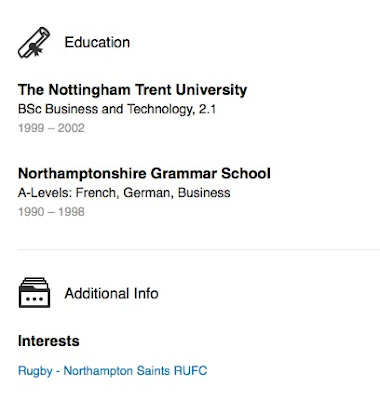 36-year-old Jeff Berrill (DOB: 24.1.1980), the sole director of fraudulent Westminster Fine Wines Ltd, has been banned for 12 years from acting as a UK director. Berrill ran a wine investment scam selling wine to investors but failing to buy any.

Berrill was initially disqualified for five years from acting as a director by Blackfriars Crown Court on 16th December 2015. This has now been extended to March 2028. On 6th November 2015 Berrill pleaded guilty at Blackfriars Crown Court to 5 counts of dishonestly making false representation. He was sentenced to 12 months in prison suspended for 24 months.

Founded in October 2011 with a share capital of £10, Westminster Fine Wines Ltd went into liquidation on 27th February 2014 when Nedim Ailyan of Abbott Fielding Ltd based in Sidcup was appointed as liquidator. The estimated deficiency was £232,326 with £231,066 owed to trade and expense customers and £2000 to Barclays Bank. Ailyan found that no wine had been bought. The company did not have an account at any UK bonded warehouse.
In his statement of affairs (27.2.2014) Berrill listed the company's assets of £1400 – £400 in office furniture and £1000 in wine. Ailyan's liquidator's report (11.3.2015) noted that Berrill thought that this case of wine 'may have been transferred into his personal account in error. The director has not provided any further details regarding any wine held personally.'

Berrill took in £335,720 from investors but never bought any wine. £244,443 was paid out of Westminster Fine Wines Bank accounts. This included payments to restaurants, pubs, hotels, supermarkets and to retail outlets of £61,854 and payments to Berrill of £43,562.


Press Release from Insolvency Service:
Jeff Berrill has been disqualified from acting as a director for 12 years for taking payment from investors for wine that was never purchased and failing to keep records of the company’s transactions.

On 11 February, following an investigation by the Insolvency Service, Mr Berrill gave a disqualification undertaking to the Secretary of State for Business, Innovation and Skills not to promote, manage, or be a director of a limited company from 3 March until 2028.


Westminster Fine Wines Limited was incorporated on 7 October 2011, offering wine investment to private investors, with Jeff Berrill as the sole director and shareholder.


Mr Berrill had worked in the wine investment industry* for a number of years and states that when the company was set up, the wine industry was booming. However, the wine market soon suffered a significant downturn. Confidence in wine investment fell and the market saw drops of 20% to 30% in wine prices, with several companies going out of business.


In late December 2013, the company received notice that the bank was withdrawing its funding and on 27 February 2014, the company was placed into liquidation.

The Insolvency Service investigation found that:

At the date of liquidation, Westminster had no assets and liabilities of £233,066.


Commenting on the disqualification, Cheryl Lambert, Chief Investigator at the Insolvency Service, said:

Directors have a duty to ensure that they act competently and with commercial probity. Directors who do not comply with this basic obligation can expect to be investigated by the Insolvency Service and enforcement action taken to remove them from the market place.
Mr Berrill misled investors and did not purchase the wine for which they had paid at least £194,885. Investors’ money was spent and records were not maintained to account for how the funds were disposed of, which could have enabled them to recover some of the money.


Mr Berrill’s conduct demonstrates that he is unfit to be a director of a company and taking action against him is a warning to all directors to seriously consider their actions and to comply with their obligations.

NB: investdrinks has amended the Insolvency Service's Press Release by marking some passage in bold.

Westminster Fine Wines Limited (CRO 07801068.) was incorporated on 7 October 2011. Its registered office was 50 Broadway, Westminster SW1H 0RG. It traded from the same premises. Jeff Berrill was the only director at the time of liquidation.


Westminster Fine Wines Limited was placed into liquidation on 27 February 2014.


Jeff Berrill is of 62 Cavendish Drive, Northampton. His date of birth is 24 January 1980.


On 6 November 2015, Jeff Berrill was, upon his own confession, convicted upon indictment of 5 counts of dishonestly making false representation to make gain for self/another or causing loss to others/exposing others to risk. He was sentenced to 12 months imprisonment suspended for 24 months in the Crown Court at Blackfriars.


The Secretary of State accepted an undertaking from Jeff Berrill on 11 February 2016. The disqualification commences on 3 March 2016.

In addition that person cannot act as an insolvency practitioner and there are many other restrictions are placed on disqualified directors by other regulations.