Dow & Jones, a wine investment company that investdrinks has long warned against using, was would up in London's High Court on Tuesday 17th March. Wine was sold at double its value, much of the stock wasn't bought and false accounts were filed at Companies House. See announcement from the Insolvency Service below. I trust that criminal charges will be brought against those responsible. 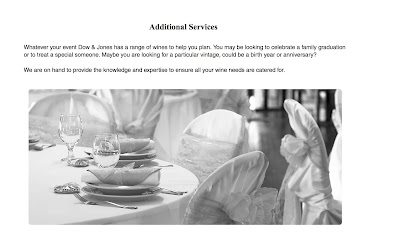 Contact address on website: 16 High Holborn, London, WC1V 6BX
was a virtual office
Dow And Jones Limited was wound up in the public interest on 17 March 2020 in the High Court of Justice before Deputy Judge Jones. The Official Receiver has been appointed as liquidator.
At the hearing to consider the petition to wind up the company, the court heard that Dow and Jones Limited was incorporated in September 2015, with a registered office in Sidcup, Kent, and a trading address in Central London until May 2019.
The Insolvency Service, however, conducted confidential investigations into the wine merchants having received complaints about Dow and Jones’s trading practices.
Investigators discovered that the company sold wine to members of the public as an investment opportunity. Dow and Jones, however, usually sold the stock to those investor customers at double the normal retail price, making it unlikely that investors would ever get their original capital back or make a profit.
Sales staff working for Dow and Jones falsely claimed to investors that additional purchases were required to ensure that a portfolio of wines could be sold quicker and at a higher price.
Dow and Jones had also failed to honour customer orders going back to 2016, with the company also having filed inaccurate accounts at Companies House.
In her judgment, Deputy Judge Jones stated that “there is something extremely wrong about this company”, before confirming that the promised returns to investors were “vastly overstated”.
Irshard Mohammed, Senior Investigator at the Insolvency Service, said

Similar to boiler room operations, Dow and Jones used sales scripts from previously failed companies, which assisted salesmen to convince people, including the vulnerable, to invest their money in unregulated investments. Even those customers who received the wine they had paid for lost a sizable proportion of their investment, as the wine was materially overpriced.
The courts recognised the unscrupulous nature of Dow and Jones when it wound-up the company and our advice is always to reject unsolicited investment offers that sound too good to be true.

All enquiries concerning the affairs of the company should be made to:

Dow And Jones Limited (Company number: 09778709) was incorporated on 15 September 2015. The current registered office is located at Onega House, 112 Main Road, Sidcup, Kent, DA14 6NE and it had trading addresses at 4th Floor, 50 Essex Street, London, WC2R 3JF until May 2019 and 16 High Holborn, London, WC1V 6BX, being a virtual office address.
The current recorded director of the company is Mr Anthony Collins, formerly known as Kyrone Collins, whose date of birth is recorded as being in June 1988.
The Petition was presented by The Secretary of State for Business, Energy and Industrial Strategy (“BEIS”) on 12 February 2020 in the High Court of Justice, Business and Property Courts in England and Wales (CR-2020-001052), under the provisions of section 124A of the Insolvency Act 1986 following confidential enquiries by Company Investigations under section 447 of the Companies Act 1985, as amended.
Posted by Jim's Loire at 14:21 No comments: