'We ensure your portfolio is expertly and reliably managed for the best results and keep in touch with you through portfolio valuations and market forecasts.'

'We provide unique and personal advice on how to make a good financial return within this market.' 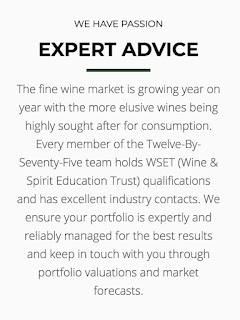 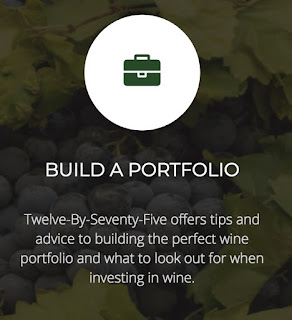 A good financial return? For whom I have to wonder ...... having been contacted by BV, whose father was persuaded to exchange his portfolio of DRC wines for variants of “Excellence de Belliard” wines, which have proved be a dead duck investment – what a surprise!

'My companies goal is to create a straight forward, transparent, personally tailored to the client Wine Investment Brokerage. After working my way up to Senior broker at a previous company I saw a gap in the market. This gap in the market is a wine investment company that solely has the clients best interests as number one priority. This is the future of wine investment.

My passion is inventing new, more innovative ways for people that are new or familiar to the industry to get the best understanding and profits from there investments, with a broker they can trust and rely on to have there (sic) best interest as paramount.

Without Prejudice, save as to costs


I set out below my family’s experience of investing through Twelve By Seventy Five Limited (TBSF). All statements of fact can be evidenced.

At this time, he was contacted by Mr Riccardo De’Nardis, a co-director, along with yourself, of newly formed wine brokerage, Twelve By Seventy Five Limited (TBSF).

Mr De’Nardis had been involved in the sale of the DRC portfolio to my father (in his previous role at Capital Vintners) and used this former contact to introduce my father to TBSF.

During the next three years my father was advised by, and traded through, TBSF. This led to his existing portfolio being systematically sold to TBSF and reinvested (primarily) in variants of “Excellence de Belliard” wines, purchased from TBSF, at an invoiced value amounting to some £390,000.

These wines have proved to be basically unsaleable:


This is despite my father being led to believe that the investments were to be short term in nature; to quote a member of your staff, “flipped” for a quick profit.  In light of these facts I can only conclude that TBSF either offered catastrophically bad (negligent) advice to my father, or deliberately set out to defraud him.


Subsequent to my father’s death in February 2017 I reconciled all the transactions he had made with TBSF to both bank statements and to the wines present in his warehouse accounts.

This exercise identified a number of “administrative anomalies”, which led (over time) to the recovery of £32,000 from TBSF.

Subsequent to this, TBSF agreed to help sell the portfolio off.  However, this did not go well and in Summer 2017 I finally lost patience with TBSF’s increasingly implausible excuses for failing to sell a small tranche of the Belliard portfolio. I therefore formally confronted Mr De’Nardis with my conclusion that the value of the wines had been significantly misrepresented to my father by TBSF (either fraudulently or negligently).

After prolonged exchanges, during which Mr De’Nardis left TBSF suddenly and handed over to you, we eventually reached a “settlement agreement” during Summer 2017, involving the return of the wines to TBSF for a payment of £275,000 spread over two years.  However, you ultimately refused to sign it, claiming to have problems with your business and personal banking arrangements.

Subsequent to this we have managed to agree two additional payments, against threats of a court process being initiated, amounting to £28,000.  This leaves our outstanding claim at £330,000.


TBSF’s accounts to January 2017 show that the two directors at that time, Mr De’Nardis and yourself, were able to take £657,000 in directors’ loans from the business.  The business does not have significant capital, nor any borrowings, so this implies some profitable and highly cash generative trading has taken place.  No direct link to your dealings with my father can be proved from the information available, but I set out below an example of one en-primeur deal TBSF did with him, for which the wines landed in his warehouse account in March this year:

The sales invoice does not disclose any such uplift, but I assume that this is your “margin” on what is basically a risk-free transaction for your business.

Subsequent to Mr De’Nardis’ departure, you are now the sole director.  You no longer mention banking issues but continue to claim to be unable to offer any kind of immediate settlement (despite the money potentially available from the repayment of the directors’ loans).  You recently indicated willingness to sign a new settlement agreement but then refused to respond when sent a draft for signature.  In the meantime, it appears that TBSF is changing focus, to work on new ventures, namely “The Wine Drinker” and “Two Thirsty Bulldogs”, and your responses to my emails are often long delayed and incomplete.

This has now been going on for well over a year and needs to be resolved, one way or another.  I have therefore given up on privately discussing this matter with you.  This letter is the first step in a series of escalations I plan to make to bring this issue to a conclusion.  However, I remain open to constructive proposals in relation to how this might be achieved

My view:
What appalling account of an elderly man being misled – either because Twelve by Seventy Five run then by Sultan Rashid and Riccardo De’Nardis had no idea about wine investment despite their claims of expertise or they set out to relieve BV's father of his DRC wines, that are certainly of investment potential, and replace them with variants of “Excellence de Belliard”, which nobody wants to buy. So either gross incompetence or very sharp practice at best.

Sultan Rashid has two new ventures* (The Wine Drinker and Two Thirsty Bulldogs), to which I will certainly be giving a very wide berth:

His ex-partner Riccardo De’Nardis set up a new company – Dens Global Ltd – on 12th July 2017. I will also be avoiding this company.
'deformation of character'
* Sultan Rashid objects to the mention of his two new ventures and has threatened me with legal action if news of Rashid's new ventures are no removed from this post:

'You are right with me taking over the company and many changes have taken place since me doing so. The fact you mention my two new companies is deformation of character and I ask for you to remove this ASAP, otherwise I will have no choice to get my lawyers involved and sue you for this. Like i mentioned I have no issue with you mentioned TBSV, due to this situation being directly affiliated with this company.

If this The wine drinker and Two thirsty bulldogs are not removed from your blog within 24 hours I will have no other option than to take action.'

Extract of email sent by Sultan Rashid on 26.6.2018 @11.35
I have asked Rashid how mention of two companies that he has formed through UK Companies House and cited on his company's website and emails is 'deformation (defamation) of character'. I await Rashid's reply with interest.

PS Escrow – about us

Claiming 15 years experience but website
set up in May 2018 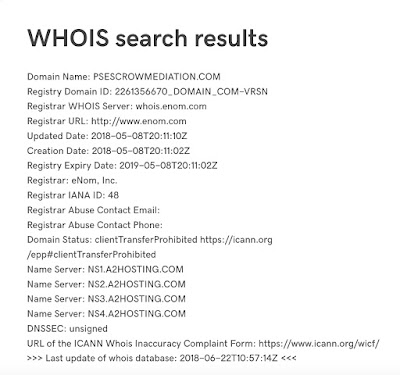 A warning from Hertfordshire Police's Serious Fraud and Cyper Unit has recently been sent to clients of the now failed Montevino Partners/Spirited Ventures warning of possible recovery fraud by PS Escrow mediation in Dubai:

I am confident that the Dubai company has no connection with PS Escrow Inc in Los Angeles.

My apologies for contacting some of you out of the blue. I was the officer asked to look at a complaint made by some customers of Montevino Partners/Spirited Ventures that the companies were responsible for committing a fraud. Although one member of staff, Mr Michael MOORE was clearly a fraudster, and has been convicted of fraud, I could not prove that Montevino Partners/Spirited Ventures was a fraudulent vehicle or that it committed a fraud (as opposed to being a badly run business).

The reason I am contacting some of you for the first time, is that I have been made aware that some former investors have been contacted by a male claiming to be a David Halliday of Pearson Stone (PS Escrow) company in Dubai, and offering to buy back wine for well over the purchase price, and offering compensation.

The company website http://www.psescrowmediation.com/ and @psescrowmediation.com e-mail domain appears on research to have been registered on 08/05/2018, and if you have had a chance to look at the website, you will have probably noticed it is rather a thin site, and contains such odd turns of phrase as

“We cannot operate a robotic service or offer a naive on-line facility as this would not aid our client’s greatest. We deal with transactions that require an unmeasurable amount of care and precision and as such do so with our client’s interest at the basis.”

I have spoken with Action Fraud, who have confirmed that have already received a complaint of fraud against this company with regards to “Park First Limited” investments, and appear to have been offering similar compensation – at a cost. I can not confirm that Pearson Stone Escrow Mediation is a fraud, however I strongly suspect that this is a Recovery Fraud (please see the action fraud information on this type of fraud by either clicking on the link (https://www.actionfraud.police.uk/sites/default/files/Fraud%20recovery%20fraud.doc.pdf) or for the more cautious of you go to the Action Fraud website and search for “Recovery Fraud”), and would recommend you are cautious if this company or a similar company contacts you – just because the telephone number appears to be in Dubai, it is very easy to buy access to a virtual telephone number that can be based anywhere in the world.

If you have paid money/given wine to this company and not received what you were expecting, I would urge you to report the matter to Action Fraud.

If you have any questions please feel free to give me a call.