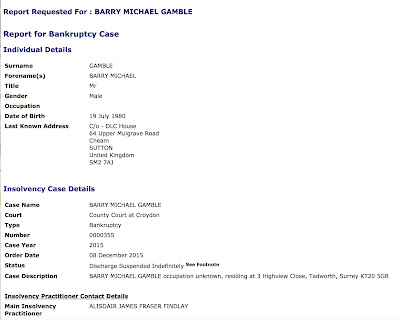 
As 2016 draws to a close I am sure that Barry Gamble's many friends and fervent admirers, who may include Emma and Katie, will appreciate an update, especially as the liquidator's latest report to 30.10.16 is available here.

Although Gamble was made bankrupt at Croydon County Court on 8th December 2015, his bankruptcy wasn't confirmed until 2nd June 2016 as Gamble appealed to the court claiming that the bankruptcy order should not have been made. Fortunately Gamble's delaying tactics failed – the order arose from the misfeasance action brought by solicitors acting for the liquidator of The London Vines Ltd. In the latter half of 2015 Gamble was fined by default £741,647.45.

The UK bankruptcy register shows that Gamble's bankruptcy, which would normally have ended on 8th December 2016, has been extended indefinitely – 'Order suspending bankrupt’s discharge under Section 279(3) of the Insolvency Act 1986 until the fulfillment of conditions as specified in the Order made by the Court and effective from 29 November 2016'. I will report on these conditions if and when I have the details.

Given the successful misfeasance claim – taking money out of The London Vines Ltd without proper justification – Gamble should have been banned as a UK director. That this wasn't pursued may well be down to Government cuts in The Insolvency Service. Anyway Gamble's continued bankruptcy precludes him from being a UK director.

There is potential further bad news for the Gamble household. Amanda Gamble, Barry's wife, may well also be made bankrupt early in 2017 as reported in the Liquidator's report from 31st October 2015 to 30th October 2016. 'A Statutory Demand was personally served on Mrs Gamble on 22nd October 2016 and accordingly, Mrs Gamble has until 09 November 2016 to apply to the Court to have the Demand set aside and we will be able to present a Bankruptcy Petition from 14 November 2016.' It seems that Amanda Gamble is yet to be made bankrupt as her name does not yet appear on the bankruptcy register.

According to the liquidator's latest report: 'Barry Gamble claimed that all of the net sale proceeds from the property at 6 Rowan Close (Banstead) were paid to his wife Amanda Gamble'.

Sadly I suspect that few will be surprised to learn that it is very unlikely that any of the clients and investors with The London Vines Ltd will get any of the £1.63 million claimed to be owing.

Gamble made an appearance here in the Mirror back in February 2016.

Barry Gamble's libel case
In December 2014 Barry Gamble decided to sue me in the High Court for libel and slander. Essentially, despite the misfeasance judgment, Gamble claimed to be an honest businessman.

Gamble based much of his case and claim on a company called ESW Exports (UK) Ltd, which supposedly had experience and expertise in exporting English sparkling wine. Central to Gamble's legal claim was that he had personally lost a contract with a Toronto based Canadian wine importer worth £80,000.

This contract, of course, was pure fantasy and the whole case an abuse of legal process. There never was a contract with the Canadian importer. It took Gamble some nine months to come up with the name of the importer who, when I contacted him in November 2015, told me:

'I took the time to go through my records to determine whether I had any contact with Mr. Gamble as his name and company did not ring a bell.  I deal with dozens of suppliers every year and many of our contacts do not result in any business. I did find some e-mail correspondence with him in 2013 where I informed him of some upcoming opportunities for sparkling wines with our monopoly, the LCBO. He sent me information about one Italian sparkling wine which was priced outrageously with no hope of ever being purchased. I reached out to him again a few months later regarding another opportunity and he did not respond so I closed my file. I have never heard from him since.'

Gamble was not a director or shareholder of ESW Exports (UK) Ltd – he never explained why he would have personally benefitted from the fantasy £80,000 contract. ESW Exports (UK) Ltd was established on 16th August 2012. It was struck off on 21st October 2014 for non-compliance – no annual returns of accounts were filed.

In 2012 Gamble did make contact with a number of English sparkling wine producers. One of them – Sam Lindo of the excellent Camel Valley  – was not impressed:

'I have only come across these guys from them enquiring about exporting our wine.  They sound like a bunch of nutters. I told them their website made them look like a con, it showed a total lack of knowledge of our industry, in particular how small it is. The chap missed the joke I made about only using Western Union money transfers.
Some of these people can be genuine, we make everyone pay up front for the first 2 orders and this stops any chancers.'
Good to go:
On 9th August 2012 Gamble emailed a number of English sparkling wine producers claiming to have 'importers/agents in the major citys (sic) in China and India' and that 'Myself and my newly formed export company ESW Exports Ltd are taking English sparkling wine to the other side of the planet'.

'Hi Guys,
As your more than likely aware, English sparkling wine has a reputation rarely surpassed.  In fact so popular is the wine of our fair land that overseas they cant get enough actually they cant get any, Myself and my newly formed export company ESW Exports LTD are taking English sparkling wine to the other side of the planet..
With a handful of importers/agents in the major citys in China and India good to go all we need is the wine..
So I write this email in hope that we can spread the word with gusto, we would look to purchase at least 100 cases of sparkling wine in various forms from as many vineyards as possible, of course if the wines are award winning in some way then all the better..
All monies for your wines will of course be paid up front and we would look to build from there..
Feel free to get in contact with myself on the number below or reply to this email at your earliest convenience..
Many Thanks
Barry Gamble'

Gamble's claim of 'importers/agents' in China and India is also likely to have been a complete fantasy. Interestingly no mention here of a Canadian importer....

Shortly before Gamble was made bankrupt at Croydon Court, he made an offer of settlement, which included a demand for £3000 to cover his legal costs. Gamble never received a penny. Once a liquidator was appointed in respect of Gamble's personal bankruptcy, they discontinued the legal action since bankrupt Gamble was not in a position to pursue this case.