Jack Williams, legal adviser – who was his mysterious client? 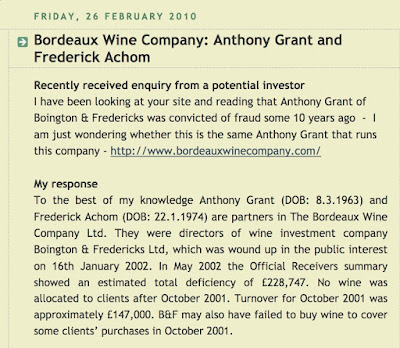 
Starting on 30th May 2016 and ending the same day I had an unproductive correspondence with Jack Williams, who described himself as 'legal adviser'.

'Dear Admin/Editor,
This is to bring your kind attention towards a very serious matter. A defamatory content
http://investdrinks-blog.blogspot.in/2010/02/bordeaux-wine-company-anthony-grant-and.html has been published by you on your website http://investdrinks-blog.blogspot.in/ that is creating a lot of problem for my client. My client had no relation with this issue.
My client has been unnecessarily dragged into it just due to its name and fame. The appearance of such type of content online is defaming my client on regular basis personally as well as professionally. And, as per the law my client has complete right to get it erased permanently from your website and google search result as well.
Hence, its a request to get it erased/delete/take down asap
Defamatory link need to be deleted are:
http://investdrinks-blog.blogspot.in/2010/02/bordeaux-wine-company-anthony-grant-and.html
Your quick action and response will be highly appreciated.
Thank you
Jack Williams
legal adviser'


Williams never revealed who he was 'representing' nor what was deemed defamatory in my post of 26th February 2010. He wanted to know the source of the information that Boington & Fredericks had been closed in the public interest and that both Grant and Achom had spent time in prison for an EU fraud. When Williams deemed that Companies House and London's Southwark Crown Court as sources didn't satisfy him, I decided that Williams was an internet troll and that it would be foolish to spend anymore time on him.

'As I stated in my previous email again I reinstate that my client had no relation with this issue specially the way it has been written in your post and hence I asked you about the source you have used in this write up so that I can also see its facts. But you didn't provide me the same.Yes, the details in investdrinks post are in the public domain and hence its a serious matter for my client. I think you are unable to provide me enough facts/proofs/source behind this post and hence I believe that the matter should be taken to court. You will be notified about this case's hearing.
Thanks'
'Hello Jim

Hope you are doing good as per our  last conversation against blog article without reference link or without evidence we have file legal cyber bulling case against your and for legal notice we need your postal address so please share your complete address so that i can share legal notice with your soon.
Regards'
It seems clear that the aim of Williams or whoever created his persona wanted details about the history of Frederick (Freddy) Achom and/or Boington Anthony Grant removed from the net.

It is possible that this attempt to have my February 26th 2010 post removed as part of a more comprehensive effort to cleanse the net of Achom and Grant's history. Was 'Jack Williams' linked in some way to this story of fake DMCA notices?
https://webactivism.com/apw-asset-management-investigation-for-fraud-impersonation-and-perjury-fake-dmca-12185604/

Just a coincidence that Frederick Achom was facing an appearance at Southwark Crown Court in late July 2016 for breaching his director disqualification by running now bust APW Asset Management Ltd?

Frederick Achom was given a six month suspended jail sentence and ordered to pay nearly £1 million within three months for his admitted breach of his disqualification. If Achom fails to pay the fine he faces up to five years in jail. Details here and here.