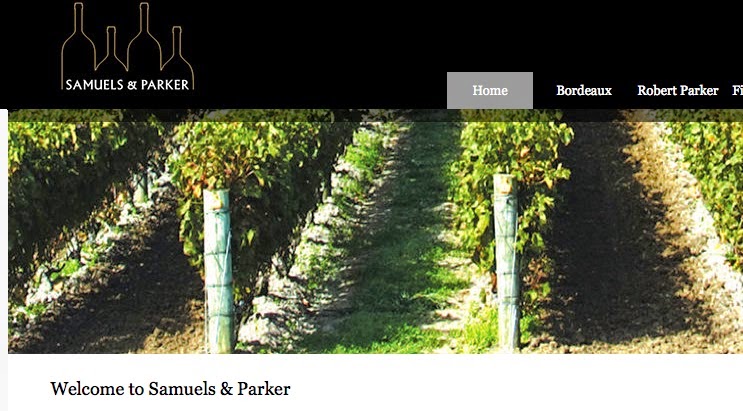 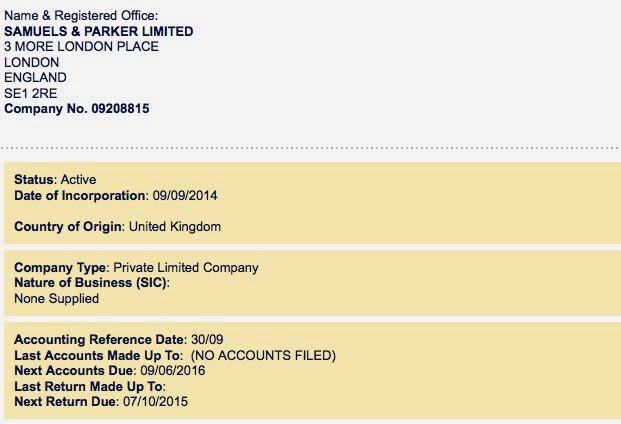 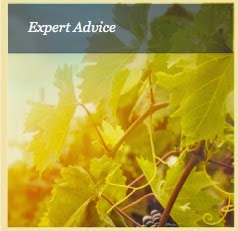 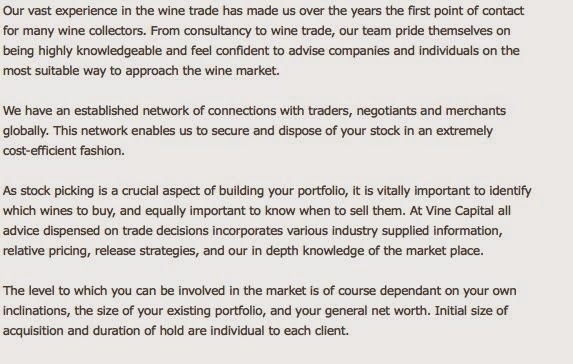 'As stock picking is a crucial aspect of building your portfolio,
it is vitally important to identify which wines to buy'

'our in depth knowledge of the market place'

Vine Capital Ltd and 31-year-old Ben Lancaster, their sole director and sole shareholder (100 £1 shares) claim vast experience. So why were they punting out a case (12 bottles) of 2012 Cheval Blanc at £7000 in mid-November as an 'investment' when Justerini & Brooks had this at £3,250? 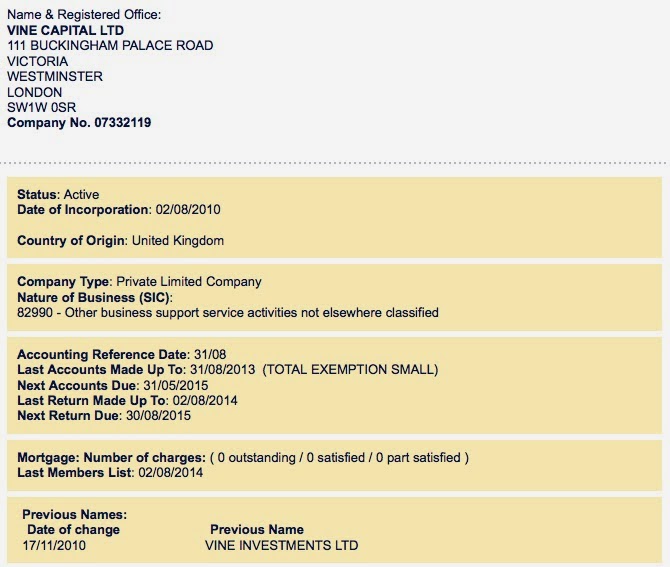 Vine Capital Ltd was formed on 2nd August 2010 and changed its name from Vine Investments Ltd to Vine Capital Ltd on 17.11.2010. Ben Lancaster (DOB: 18.7.1983) became the sole director on 1.9.2012. Since 14th March 2011 the company's registered address is 111 Buckingham Palace Road, London BW1 0SR. However, in October 2011 The Vine Capital Ltd placed an ad with Junior Broker for sales personnel to work in Bromley – London's capital of scams. 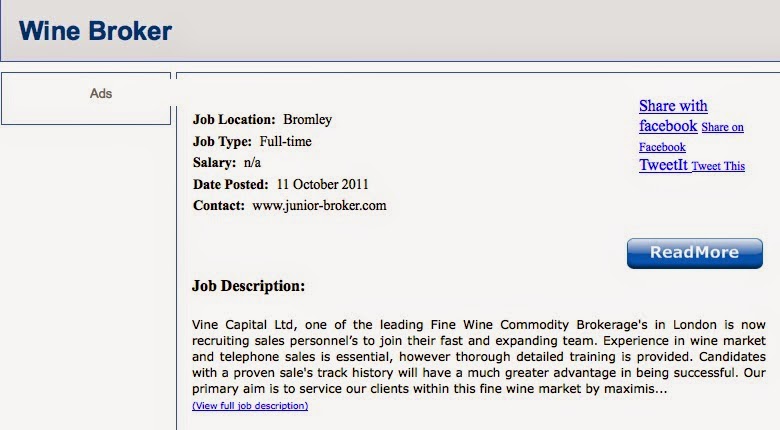 'At Vine Capital, we proudly take an active approach
to research and analysis, offering a continually
updated insight into the market and market forces...
The future of the fine wine market is exciting and
many industry experts are predicting an
increase of 10% by December 2013
and expect to see the market growing by 22% by Christmas 2014.'

I shall be avoiding Ben Lancaster's Vine Capital Ltd – thanks but no thanks!

Fine wine scammer gets maximum disqualification
Kenneth Jean Pierre Gundlach, the director of Bordeaux Fine Wines Limited, a company which sold wine to members of the public, has been disqualified from promoting, managing or directing a limited company until 2030 for failing to purchase at least £9.3 million of wine sold to investors.

In the undertaking given to the Secretary of State for Business, Innovation & Skills, Mr Gundlach accepted that he had failed to purchase and/or allocate at least 1,750 cases of wine to satisfy purchases made by its customers. His disqualification is for 15 years, the maximum period available.

Commenting on this case Paul Titherington, Official Receiver in the Public Interest Unit, said:
“It was Mr Gundlach and his salesmen who benefited from this company rather than its honest investors.  He continued to sell wine when he knew he had failed to fulfil earlier sales. Anyone showing such blatant disregard for commercial morality should expect to be banned from running any limited company for a lengthy period time.”

The disqualification follows investigation by the Public Interest Unit, a specialist team of the Insolvency Service. Mr Gundlach used the dividends he received from the company to fund his lifestyle which included payments for performance cars, race horses (including Bunbury Cup winner Field of Dream), private jet hire, and designer clothing and jewellery.  Mr Gundlach continued to market and sell wine to existing investors at a time when he knew or ought to have known that those investors had still not been allocated the cases of wine they had previously purchased from the Company.

Bordeaux Fine Wines Limited was wound up in the public interest on 26th February 2014 following an earlier investigation by the Investigations and Enforcement Services division of the Insolvency Service.


The disqualification follows investigation by the Public Interest Unit, a specialist team of the Insolvency Service. Mr Gundlach used the dividends he received from the company to fund his lifestyle which included payments for performance cars, race horses (including Bunbury Cup winner Field of Dream), private jet hire, and designer clothing and jewellery.  Mr Gundlach continued to market and sell wine to existing investors at a time when he knew or ought to have known that those investors had still not been allocated the cases of wine they had previously purchased from the Company.

Bordeaux Fine Wines Limited was wound up in the public interest on 26 February 2014 following an earlier investigation by the Investigations and Enforcement Services division of the Insolvency Service.

Commenting on the case, Vicky Bagnall, director of Investigations and Enforcement Services at the Insolvency Service, said:
“These excellent results show that where the public have been scammed we do not stop at winding the company up, we also pursue the individual directors to ensure that if they wish to trade again, they must do so at their own risk.”
Notes to Editors
Bordeaux Fine Wines Ltd (“BFW”) was incorporated on 18 September 2008. Its trading address was at 3rd Floor, Lansdowne Road, Croydon CR9 2ER.

The petition to wind up the company was presented by the Secretary of State for Business, Innovations and Skills in the public interest following an investigation conducted by Company Investigations (Live), another specialist unit within the Insolvency Service. The winding up order was made against BFW on 26 February 2014.

The liquidator has advised that he has received claims from investors and creditors totalling £57,697,885 (including a claim from Her Majesty’s Revenue & Customs of £15,875,210 ) which are yet to be adjudicated.

On 30 January 2015, Kenneth Jean Pierre Gundlach (“Mr Gundlach”) signed a disqualification undertaking for a period of 15 years which means that he cannot promote, manage, or be a director of a limited company until 2030.  The period of disqualification will commence from 23 February 2015.  The misconduct Mr Gundlach admitted to was:

Mr Gundlach caused BFW to trade in a manner which lacked commercial probity in that he caused it to fail to purchase and/or allocate sufficient cases of wine to satisfy purchases made by its customers. In particular between 3 March 2009 and the cessation of trade BFW:

Sold 3,196 cases of wine totalling at least £19,264,388 to members of the public as an investment; and
Failed to supply 1,750 cases of wine to accounts at the bonded warehouse in the investor’s name totalling at least £9,393,373 whilst only having 780 cases stored in its bonded warehouse which were sold by the liquidator for £1,513,150 before costs;

In addition, Mr Gundlach:
Caused BFW to continue to market and sell wine to investors who either had no account at the LCB or when BFW had not transferred the previous purchase into the investor’s bonded warehouse account; and

Failed to monitor and review the position of BFW with respect to the correct allocation of an investor’s wine to a bonded warehouse in their name when he knew from 1 October 2010 that BFW had failed to supply wine, and continued to do so when he admits he was fully aware from May or June 2013.

5.      The result of which is that following the making of the winding-up Order, wine held in BFW’s bonded warehouse account could not be allocated to a particular investor.

6.      At a time when BFW was failing to purchase sufficient wine to satisfy investors purchases and failing to allocate wine to a particular investor’s bonded warehouse account, Mr Gundlach:
Received dividends totalling £10,680,516 as shown in accounts filed at Companies House; and
Appears to have used BFW’s account for his personal benefit


·        Take part, directly or indirectly, in the promotion, formation or management of a company or limited liability partnership


In addition many other restrictions are placed on disqualified directors by other regulations. Further information on director disqualifications and restrictions can be found at http://www.bis.gov.uk/insolvency/Companies/insolvent-companies

David Ingram of Grant Thornton UK LLP was appointed as liquidator of the BFW on 14 March 2014 following a meeting of creditors. As part of Mr Ingram's duties as the liquidator, he is to realise assets for the benefit of the liquidation estate and will investigate the affairs of Bordeaux Fine Wines Limited and the conduct of Mr Gundlach in so far as it assists him in identifying and recovering assets. To date, Mr Ingram has realised the total sum of £1,423,132 for the liquidation estate and his investigations are ongoing.  Investors and creditors who have not submitted a claim in the proceedings should contact the liquidator’s office: matthew.d.vines@uk.gt.com

Noble Rock Partners or Claremont Partnership? I'd avoid both!

The following message from TJ was passed onto investdrinks by a wine company: