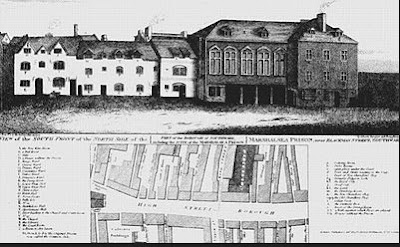 The Marshalsea – famous as a debtor's prison (London)


Yesterday (17th September 2015) Barry Gamble (ex-director of 'wine investment' company The London Vines Ltd failed in his attempt to get the default judgment for £741,647.45 handed down by the Birmingham High Court in late 2014. The judgment related to action brought on behalf of the liquidator of The London Vines Ltd against Gamble and the company's other director and the shareholders for trousering money from the company without justification. Enriching themselves at the expense of the unfortunate investors.

I assume that Barry Gamble's attempt to have the default judgment overturned was in response to the liquidator move to make him personally bankrupt in order to recoup the £741,647.45 sum from judgment in default. Clearly Gamble failed to convince the Birmingham Court and the bankruptcy order was passed.

investdrinks understands that the Gambles are currently living in a large 5 bedroomed house in Highview Close, Tadworth, Surrey.

Although the above information was from a very reliable source, it became apparent that while Gamble had lost his attempt to overturn the default judgment against him, he wasn't made personally bankrupt on 17th September 2015. Therefore I removed this post.

Barry Michael Gamble was made personally bankrupt on Tuesday 8th December 2015 at a brief hearing at Croydon Court. Please see: http://investdrinks-blog.blogspot.co.uk/2015/12/barry-gamble-declared-bankrupt-croydon.html
Posted by Jim's Loire at 21:33