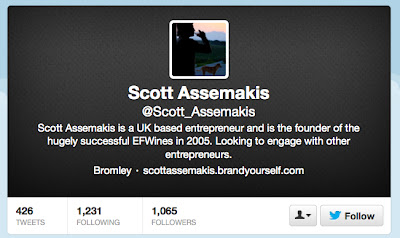 European Fine Wines Ltd has been mooted as a possible candidate for membership of the WIA (Wine Investment Association).

Terence Christopher Farr, 31, from Romford, Essex, has been disqualified from acting as a company director for ten years for operating illegal land investment schemes.

I talked to Farr in 2010 and warned investors to steer clear. He was marketing investments without a licence from the Financial Services Authority and advertised his business, Claremont Forbes Land & Property Limited, as a leading company even though it was only six months old. It went into liquidation a year later after raking in £944,000 from the public without keeping proper records. Insolvency Service investigator Mark Bruce describes the size of the unexplained deals as ‘highly suspicious.’

Separately, a gang who ran a series of corrupt land investment companies based in Bromley, Kent, has also been disqualified from running any limited company.

Scott Assemakis, David Evans and Gavin Gravesande are banned for 11 years, and James Murphy and Dominic Whatley for ten years. They were behind a string of companies, including The Property Partnership and Burnhill Land Investments. The ban has forced Assemakis and Evans to quit as directors of investment business European Fine Wines Limited.'

Scott Assemakis' role in the Property Partnership (no connection with the