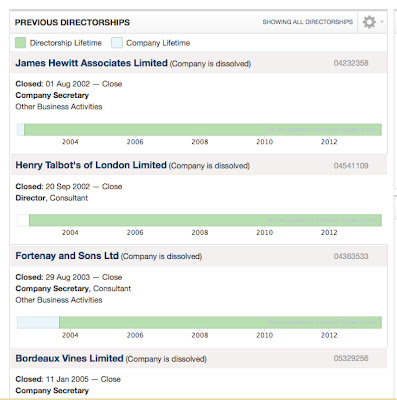 
It would appear that 42-year-old Robert Phillips, the sole current director of The London Vines Ltd, may bear a remarkable resemblance to James Morrison, who was a director of Henry Talbot Ltd – closed in the public interest in 2003. Morrison was also company secretary of wine investment company James Hewitt Associates Ltd, which was closed in the public interest in October 2002. James Hewitt Associates Ltd was run by Andrew Dunne, now resident in Northern Cyprus.

Barry Gamble and Robert Phillips also worked at Countrywide Land, a land banking company. Andrew Dunne was reportedly the ringleader of this £35 million fraud. Gamble says that he worked for Countrywide for about a year. He was aware of Andrew Dunne being involved in the company, but that Dunne was never at any time his manager and he had no association with him.

Dunne is now understood to be in Northern Cyprus. In addition to Countrywide Land He was involved in a long list of scam companies including Ransby Hoare Associates Ltd, Liquid Acquisitions Ltd, James Hewitt Associates Ltd, Bordeaux UK Ltd (all wine investments) and Paramount Land UK and Consolidated Land UK (both land banking).

investdrinks has been contacted by several clients of The London Vines Ltd, who are concerned about their investments. They have been urged to file complaints through Action Fraud.


Capital Bordeaux Investments Ltd may also have disappeared. Annual return is overdue since 22.5.2013 and phone calls are put through to a mailbox.