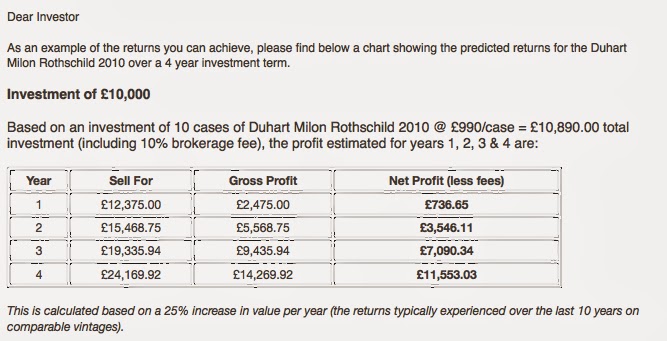 I was recently contacted by TG, a putative investor with FCF Investments. This is the trading name of FCF Associates Ltd. The company was founded 10.102011 and has two directors: 38-year-old Matthew Simon Guy and 34-year-old Steven David Carruthers. The company's share capital is £2 – split equally between the two directors. Their trading address is a serviced office in Knutsford. FCF produces ludicrously optimistic projections based on over-priced wines with a 15% service charge!

FCF Investments sent TG an example 'of the returns you can achieve' enclosing the above chart 'showing the predicted returns for the Duhart Milon Rothschild 2010 over a 4 year investment period. This is calculated based on a 25% increase in value per year (the returns typically experienced over the last 10 years on comparable vintages.'

This really is flying pig territory especially as FCF Investments sell their wines at a considerably higher price than can be found elsewhere and charge a 15% service charge (10% on purchase, 5% on sale) – presumably for their expertise in overcharging.

FCF's projections have no basis in reality as Bordeaux prices have fallen considerably since 2011. For a look at the real world of fine wine prices and their movments see http://www.bordeauxindex.com/market.php as well as the Liv-ex indices.

FCF's advice on tax liabilities is also wrong. Bordeaux First Growths bought when young from good vintages are unlikely to qualify as 'wasting assets'. FCF claims that wine for inheritance tax 'is valued at acquisition cost, not current value'. This is incorrect it is assessed at 'current value'. of course given FCF Investments' high price policy this may be an unexpected advantage!

If the fine wine market was really buoyant and a sure-fire source of profits, it is unlikely that we would have seen the collapse of several wine funds over the past year including Nobles Crus, Vintage Wine Fund and, most recently, The Bordeaux Fund. The latter reported by Wealth Manager (City Wire) to have lost 58% since its launch in 2008.