Yesterday an Essex CID officer asked investdrinks to help to pass on the message above. This CID officer is involved in investigating multiple companies, who cold call investors offering to sell their assets at inflated prices. He described how the initial investigation into a company offering commodities including 'graphene!' for wine has seen those involved set up a myriad of dubious companies once the original company was complusorily wound up. "Like an octopus," the officer said.

The likelihood is that once the investor releases their asset to these cold callers for the promised sale they will never receive a penny nor see their assets again.

The Police message is that if you want to sell your alternative assets do it through an established, reputable company.  Never, ever, use of company that has cold called you no matter how tempting their offers are.

Fortunately it has never been easier to do your due diligence on companies. Now made even easier with the trial launch of Companies House Company Information Beta Service.

The Beta service is much easier to use than the old Companies House search site and furthermore all the documents are free of charge.
Posted by Jim's Loire at 14:05 No comments: 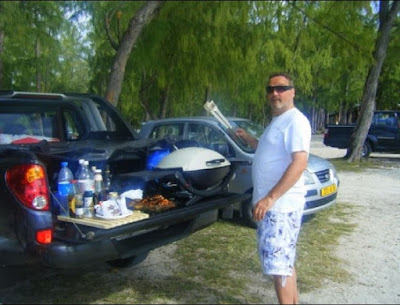 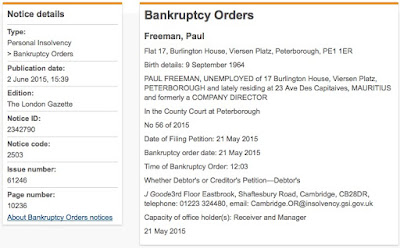 I am sure that 'entrepreneur' Paul Freeman's many friends and admirers will be greatly saddened to learn that Paul was made personally bankrupt on 21st May 2015 after he filed to be made bankrupt. The order was made in Peterborough's County Court. Although much travelled Peterborough is Paul Freeman's home town. 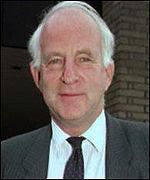 Paul Freeman employed Ernest Saunders of Guinness fame to run the rule over his Ocean-Seed 'conglomerate' after Ernest made his remarkable and almost unprecedented recovery from dementia
Posted by Jim's Loire at 22:44 2 comments:

In its four years of existence Intercontinental Wines Ltd has had a somewhat checkered career: on 16th October 2012 and 23rd April 2013 notices of impending compulsory strike-off presumably were issued by Companies House – presumably for the failure to file annual returns.

Although documents filed with UK Companies House shows that Intercontinental Wines Ltd has little or no track record, the company's website (copyright 2015) claims 'A Track Record to Rely On' with 'over 15 years experience around the world of fine wine'

'Welcome to the fine wine market
We are passionate and committed with over 15 years experience around the world of fine wine.'
From the Intercontinental Wines Ltd's website

I asked through Twitter about their 'over 15 years experience': 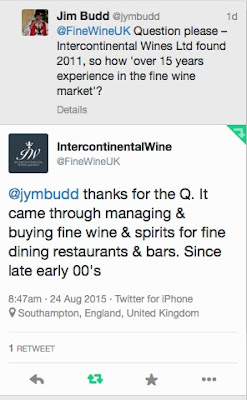 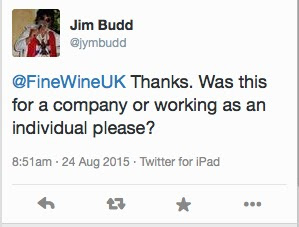 Not quite the answer I was looking for ....

So far Intercontinental Wines Ltd has not been more specific about their experience prior to the company being formed in 2011.

1855 Classification confused with Appellation Contrôlée
Amazingly although Intercontinental Wines Ltd frequently claim 'over 15 years experience in the fine wine market' their website (copyright 2015) states that in 1855 the French set rules to limit production. That you can spend 15 years buying and selling fine wine and not know that the 1855 Bordeaux classification ranked the top Left Bank Bordeaux châteaux, while it was Appellation Controlée starting from 1936 that set limits on production is a remarkable achievement!

Website:
'The market for investment wine has shown a steady increase over the last five years, with the emergence of China as leading economic superpower further fuelling its expansion.'

'Over recent years, the purchase of fine wine has increased on an unprecedented level. The ‘rules of trade’ set in place to protect the production of the leading export of the French in 1855 has kept this product limited in production and kept the desirability staggeringly high across the world.

This 1855 production rule has been the backbone to this market’s success. As the world has increased its desire, the production levels have not changed and this is reflected in the price, rising over 13% per year on average.'

No reply yet to this question


Intercontinental Wines Ltd has failed to realise that the boom in fine wine, especially Bordeaux, which was in part fuelled by demand from China came to a halt and that the last three years has been a bear market. For example wine-searcher shows that a case (12 bottles) of 2008 Lafite-Rothschild would have cost from £12,850 on 15th June 2008 and now can be bought for £5325 a case. Not a great investment! 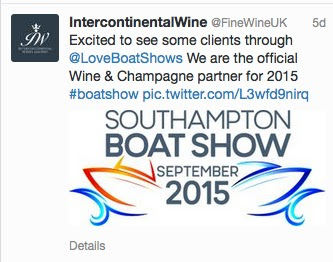 'Excited to see some clients through
@LoveBoatShows'

You have to wonder how fitted Intercontinental Wines Ltd to give advice to visitors to the Southampton Boat Show, who see that Intercontinental are Platinum Partners to the show and seek wine investment advice from them.

Update: 25th August 2015
Following yesterday's post Intercontinental Wines Ltd's website has been amended removing the reference to 1855, which wrongly claimed that production limits were set then.

Intercontinental Wines Ltd continue to claim that profits on wine are free of capital gains tax. This is incorrect – HMRC state that certain long lived wines are subject to CGT.

'Always seek professional advice for all tax implications relevant to your own account and holdings. Intercontinental Wines Ltd are not financial advisers and take all duty of care to quote and references from reputable sources.'

Curiously Intercontinental Wines Ltd's 'all duty of care' doesn't appear to include HMRC as a 'reputable' source.....

Intercontinental's Terms & Conditions makes no mention of the right to cancellation as set out in the 2013 Consumer Contracts legislation. 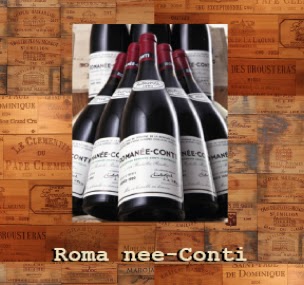 From their home page: 'Marquee Vintners Limited is a privately owned vintage fine wine merchant specialising in large wine acquisitions. Working to provide fine wines globally to a closed network of buyers and sellers. To join our network you must have a proven record of buying and selling fine wines in excess of 2000 cases per annum.'

Marquee Vintners Ltd was set up on 16th May 2014. Its sole director is Dr Wei Hu (DOB: 19.11.1963). He is also the sole shareholder – the company's share capital is all of £1. Marquee Vintners Ltd's registered office is 71-75 Shelton Street, Covent Garden, London WC2H 9JG – serviced offices and company formation.

Unfortunately Dr Wei Hu is late in filing the first annual return for his young company – the return was due to be filed on 13th June 2015.  (See below). 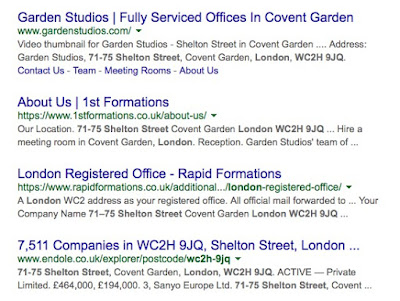 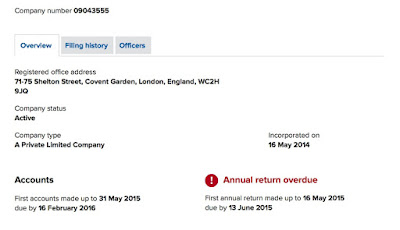 Given Dr Wei Hu's the failure to file the first annual return on time, the £1 share capital and the registered office address it is difficult to view Marquee Vintners Ltd as a serious wine company.

Update: 16th February 2016
The company was dissolved via compulsory strike-off on 29th December 2015. No accounts or returns were filed so the directors were in breach of UK Company Law. 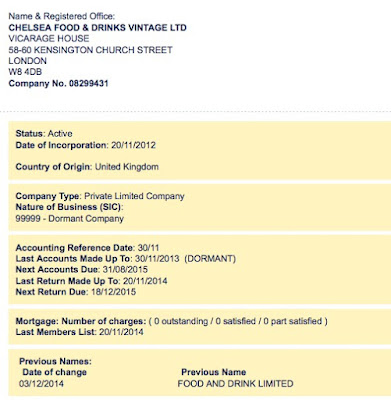 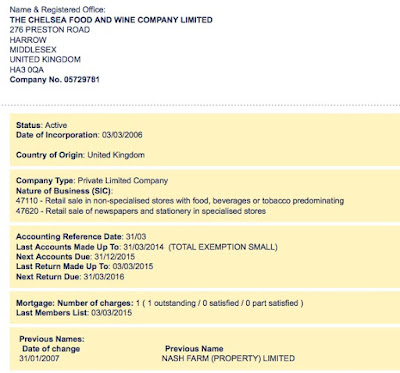 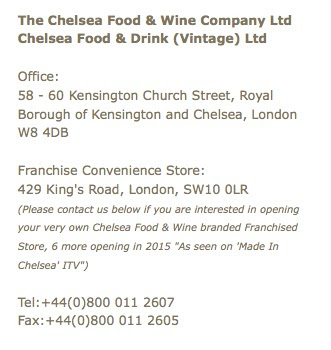 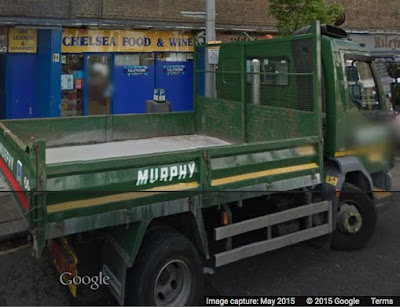 Wine investor XT was cold called by The Chelsea Food & Wine Company. They offered him a very enticing deal for his portfolio. He was told that using Liv-ex figures his portfolio was worth £7425. However, Chelsea Food & Wine Company would be prepared to buy XT's portfolio for a very generous £9110. Checking on wine-searcher and using the lowest credible the lowest selling prices XT's portfolio can be bought for just £6009. Of course the price these companies would be prepared to pay to buy these wines would naturally be lower.

So why is The Chelsea Food & Wine Company prepared to pay £3101 (34%) more for XT's portfolio than you can buy on wine-searcher? Are they a registered charity?

But what is the relationship between these two companies? According to the Chelsea Food & Wine Company website (registered on 5th November 2014): 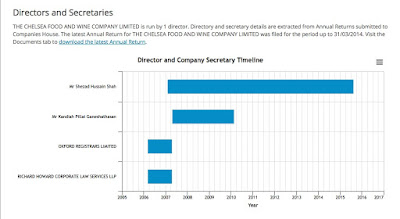 Directors of The Chelsea Food and Wine Company  Ltd
From Company Check
The Chelsea Food & Wine Company Ltd was set up on 3rd March 2006 with its registered office currently at 276 Preston Road, Harrow, Middlesex, United Kingdom, HA3 0QA. A number of other companies are also registered at this address. Shezad Hussain Shah (born January 1980) is the sole director – appointed 29th January 2007. Share capital is £1000 – all held by Shah. 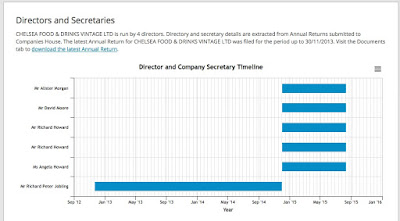 Although The Chelsea Food & Wine Company Ltd 'owns and operates Chelsea Food & Drinks (Vintage) Ltd' the two companies have entirely separate directors, registered offices and may have no shareholders in common. The company was incorporated on 20th November 2012. The initial director was Richard Jobling, who was also the sole shareholder (£1). The last accounts were made up to 30th November 2013 for a dormant company. Jobling resigned on 1st December 2014.

On the same day (1.12.14) Angela Howard (DOB: September 1972), Richard Howard (DOB: October 1961), David Moore (DOB: August 1963) and Alister Morgan (DOB: February 1975) were all appointed as directors of Chelsea Food & Drinks (Vintage) Ltd. The share capital was also increased to £50. At present I don't have the shareholders' details as the annual return was made up to 20th November 2014 and is currently not available for download from Companies House.

Unfortunately the directors appear to have misunderstood the recent Consumer Contract legislation. The 14-day period for consumers to cancel starts from the day after delivery not from 'the day on which the Contract is entered into'.

* Given that these two companies have no common directors or registered offices, it is possible, as anon notes below, that The Chelsea Food & Drinks Vintage Ltd is incorrect in claiming that it is owned by The Chelsea Food & Wine Company.