I have a decidedly curious tale to tell.
On Friday 5th I received the following message from BZ:
'I have been contacted unsolicited recently by a company called SP World wide purporting to offer an investment in Mouton Rothschild 2008. On checking them out I note that they are registered in Spain and not the UK and the wine would be stored at "Cult Wines Ltd" in Kingston Upon Thames. I have also checked out Cult Wines and they appear to be a recently UK registered outfit (Company no. 6350591).

Today I have received an invoice direct from Cult Wines for one case of 12 at £3656.25 although I have never agreed to purchase!

I am sending the invoice back to Cult Wines saying that I have not agreed to any purchase and I want immediate cancellation.

Your opinion and whether you have heard of these people would be appreciated .' 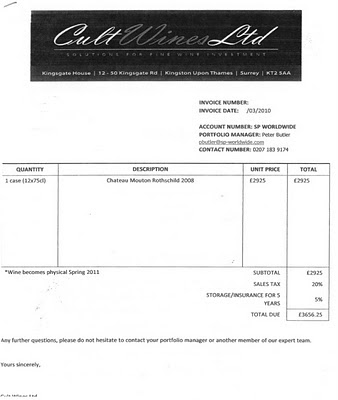 I understand from BZ that although he agreed to the salesman from SP Worldwide sending him information he had made it clear that he was not interested in buying any wine from the company. BZ wrote to Cult Wines Ltd on 5th March informing them that he had not ordered the wine, would not making any payment and was returning the invoice.
Followers of this blog will aware that I have had some contact with the Gearings, who run Cult Wines Ltd. I emailed Oliver Gearing asking what the relationship was between Cult Wines Ltd and SP Worldwide and why would Cult Wines Ltd issue an invoice on their behalf? I attached a copy of the invoice removing BZ's name and address.

I received the following response from Oliver Gearing:
'I'm afraid that is extremely distressing and is an obvious attempt to once again cause trouble for our reputation. I and no one at Cult Wines has sent  this, so I assume that someone has taken 70% of what we send out, doctored an invoice page and caused us some more trouble with yourself.

There is no contract, agreement, verbal or written, payments or signatures signed to anything to do with whoever these people are and I will sue anyone who says we do including this so called company. If you print doctored documents on your website about us and cause us more harm you will simply be playing into the hands of jealous competitors who are annoyed by our web presense on wineinvestment.org, our connections and prices.

I hope that you understand we do not go around handing out invoices to whoever feels like working with us!

Don't you think its a bit suspicous that they included new fields on the invoice that make no sense?'
I undertand from BZ that within a few minutes of me emailing OG, Cult Wines Ltd attempted to phone him. The following day (6th March) SP Worldwide phoned BZ on some five occasions trying without success to contact him. Cult Wines also called again leaving this message:
"Hello BZ this is Cult Wines we would like to speak to you about information which has been forwarded to us by a journalist called Jim Budd, which we believe was sent to you by an agent which we work with. We would like to talk to you before we enter into a legal dispute and would appreciate if you could call us back on 020 85474127 - thank you"

On 9th March BZ received a letter (sent 8th March) from Aarash Ghatineh of Cult Wines Ltd. 'I am very concerned to hear that you received this invoice which was not authorised or sent by anyone at Cult Wine Ltd.' BZ was assured that 'We do not charge 25% sales tax and the price for Mouton Rothschild 2008 is 2,925 a case. This includes storage and insurance.''I hope you understand that we will be following the matter up with the company mentioned and we never has any order reserved for you or by anyone else.' 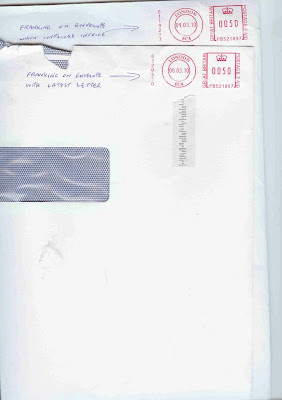 I asked Oliver Gearing about this and received the following reply:


'With  regards to the franking the answer is quite simple, we work inside an office containing over 150 different businesses or so I believe. Anyone could have sent that within this building. I am certainly not implicating anyone though.'
As I said a rather curious tale.
Posted by Jim's Loire at 12:34