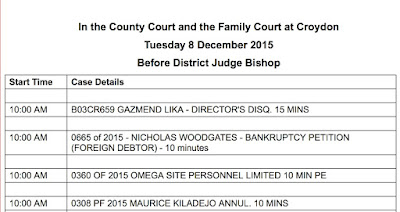 Above: Tuesday 8th December 2015 Court listing at Croydon County Court and the Family Court for five-minute hearing of a creditor's petition against Barry Gamble at 11.30 am. 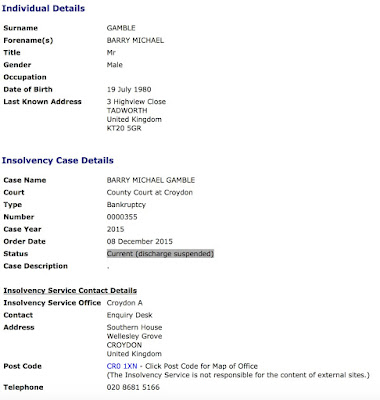 'Following an analysis of the company bank statements  for the period 1 February to the date of liquidation it was discovered that large sums of money had been paid to the shareholders and relatives of shareholders for which there were no records to substantiate the payments. Despite writing to each of the individuals involved, none were able to provide satisfactory responses and as such I instructed solicitors to commence recovery proceedings. A claim was drafted against Barry Michael Gamble, Robert Scott Phillips, Amanda Sarah Gamble, Sylwia Phillips, and David Phillips. An offer of £27,000 was made and accepted in respect of the claim against David Philiips in the sum of £33,776.'

Gamble put this view to the test on 17th September in Birmingham seeking to  to have the default judgment overturned. He failed, so English Law confirmed the Misfeasance in the running of the company – in common parlance the 'removal of large sums of money' from The London Vines Ltd by its directors and shareholders with 'no records to substantiate the payments' and with no satisfactory explanations indicates that this was a scam. Now this has led to Barry Michael Gamble's bankruptcy (8th December 2015).

The Liquidator's December 2014 report also stated that: 'We are still awaiting confirmation from the Court of Judgment in default against Amanda Gamble in the sum of £179,263.61.' It is not known what the current status of this potential judgment against Amanda Gamble is. The Liquidator's second report due by the end of this year may shed more light.

I understand from Barry Gamble that he is appealing against the default judgment.